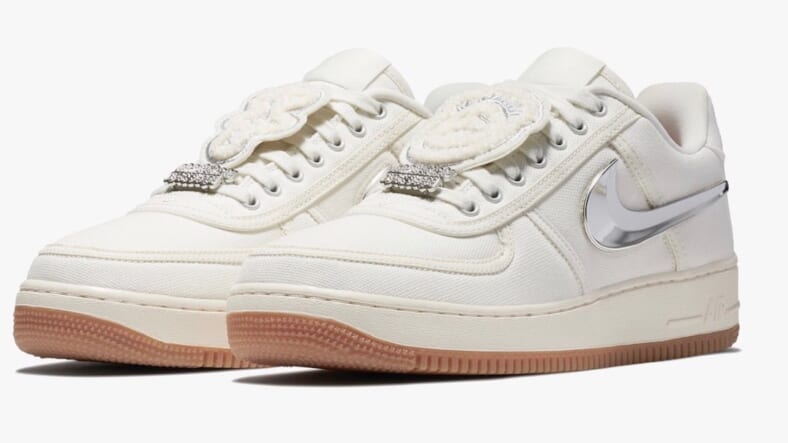 With the buzz around his third studio album Astroworld at a crescendo and his performance at the 2018 MTV Video Music Awards just announced, Travis Scott is dropping his latest sneaker collabo with Nike.

Scott’s popular Air Force 1 Lows are back, this time in a “sail” colorway of creamy off-whites… as opposed to the crisp white drop from last year.

What fans dug the first time around is back: the canvas upper, unique piping in colored 3M, the velcro patches over the laces and—most notably—the detachable Nike swooshes.

In fact, purchase of sneaker comes with an assortment of swooshes in different colors and materials, which can be swapped out on a whim. The default option is metallic.

The Nike x Travis Scott Air Force 1 “Sail” is dropping today for the original price of $150. Sneaker Shouts has some information on where to cop them. Footlocker is also expected to drop them on Saturday.

But hey, even if he doesn’t sell a boatload of these, at least his baby mama Kylie Jenner is on the verge of becoming the world’s youngest billionaire ever.

In the meantime, check out Scott’s latest video for “Stop Trying to Be Good.”