Drinking Red Wine is Apparently Good for Your Gut Health 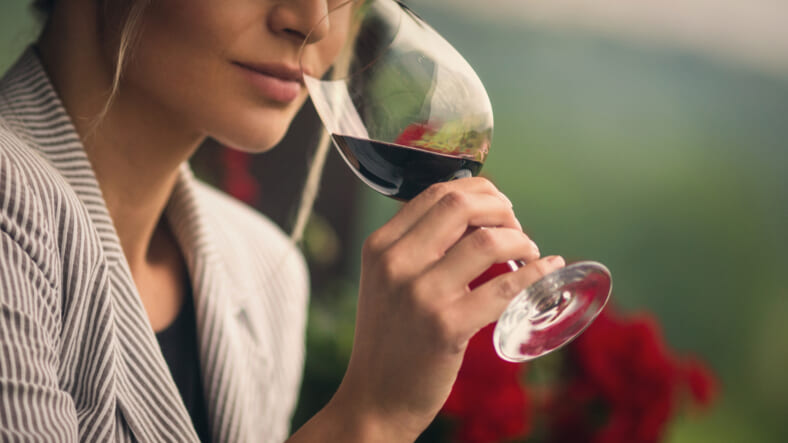 There have been a handful of intriguing scientific studies that suggest drinking moderate amounts of red wine can provide legitimate health benefits. So far, studies  have found that a glass or two of vino can boost brain activity, help battle anxiety and depression and increase your sex drive by slightly raising your testosterone levels.

And now there’s even more good news for red wine drinkers: A new study conducted by researchers at Kings College in London found that people who drink red wine seem to have higher gut microbiota diversity compared to those who drink other alcoholic beverages or don’t drink at all. That’s definitely a good thing, because the more types of gut microbiota you have, the healthier your gut is.

To clarify, the gut microbiome is full of good bacteria, also known as gut flora or microbiota. These are bacteria that you definitely want in there because they help support your immune system, metabolize otherwise indigestible compounds in food which is necessary for the absorption of vitamins and minerals, and keep your brain chemistry stable, among other benefits.

For the study, published in the scientific journal Gastroenterology, researchers examined the types of bacteria in the gastrointestinal systems of almost 3,000 alcohol drinkers in the U.S., the U.K., and the Netherlands to determine the effects of beer, cider, and both red and white wines on the gut microbiome.

The results revealed that those who drank red wine had a much higher number of different bacterial species in the gastrointestinal system regardless of age, weight, and diet–all of which impacts the gut.

“While we have long known of the unexplained benefits of red wine on heart health, this study shows that moderate red wine consumption is associated with greater diversity and healthier gut microbiota that partly explain its long-debated beneficial effects on health,” study author Caroline Le Roy explained in a statement.

“Although we observed an association between red wine consumption and the gut microbiota diversity, drinking red wine rarely, such as once every two weeks, seems to be enough to observe an effect. If you must choose one alcoholic drink today, red wine is the one to pick as it seems to potentially exert a beneficial effect on you and your gut microbes, which in turn may also help weight and risk of heart disease.”

Further research is needed to determine exactly why this is the case, but the researchers hypothesize that it may have to do with compounds called polyphenols found in the skin of grapes that have anti-inflammatory and antioxidant properties which the bacteria use as fuel.

But red wine isn’t just good for your gut health–a separate study also found that it kills 99.9 percent of bad bacteria that cause sore throats and dental plaque thanks to its concentration of antibacterial organic compounds including lactic, malic, succinic, and tartaric acids.

“Exposure to wine had a persistent antibacterial effect,” the authors wrote of the study published in the Journal of Agricultural and Food Chemistry.

Please note, however, that red wine is better at killing bad bacteria than white wine is, but not by much. So pour yourself a nice glass of red–you just might be doing yourself a favor.