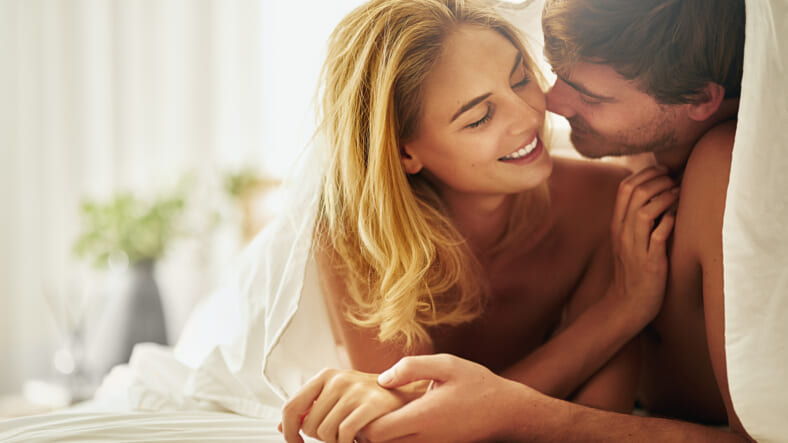 Every year, Match.com surveys thousands of singles in America to reveal some of the most notable details about our collective dating habits.

And today, they just released the results of their eighth annual Singles in America survey, which was distilled from data and information from over 5,000 singles across the U.S., making it their largest survey to date. And as you can imagine, a survey of five thousand people is huge, and revealed some very interesting things.

And so, here are 10 things we learned about America’s dating habits, including what constitutes as “good” sex, how we’re all secretly fascinated by threesomes, and how a lot of us want to fuck a robot.

1. Here’s what women want on a first date

First impressions are everything, so here are some important things to keep in mind:

Long story short, pay attention to her and make her feel important. Women love being indulged.

2. The perfect recipe for “good” sex is…

For sex to be considered “good,” 83 percent of people said their partner needs to be caring and enthusiastic, 78 percent said good communication is absolutely necessary, 76 percent need you to be a good kisser, and lastly, 75 percent said the big O is a must.

3. Talking too much during sex is a total turn off

And on the other hand, for sex to be bad, “82 percent of singles consider too much talking, no passion (74 percent), little movement (63 percent) and bad kissing (62 percent) as the major don’ts of sex.”

4. Don’t worry if the sex sucks at first

Speaking of bad sex, if the first time you hook up with your date isn’t mind-blowing, don’t fret, because only 14 percent said bad sex during the first time is a deal breaker, and “the majority of singles expect partners to develop ‘good sex’ after a few rolls in the hay.”

However, you should also know that “women are 70 percent less tolerant of bad sex than men,” which means she might end things if the sex just isn’t getting any better. Sorry.

6. Being tech-savvy is sexy

First things first: If you don’t have your own internet connection at home, it’s a huge turn off. Huge.

And if you don’t own a computer? Also a massive turn off. 68 percent of singles, including 73 percent of women and 63 percent of men, said they wouldn’t be into their date if he didn’t own a laptop. It might sound shallow, but we’re in 2018 and everything is online these days.

And finally, here’s one extra interesting nugget of information you should know: 61 percent of people in the survey said they’d be all hot and bothered if their date has an Alexa or Google Home in the house. I’m not sure why, but that’s cool.

Guess what? Two-timing is actually super common, with 40 percent of people saying they’ve dated more than one person at a time. But we’re talking casual dating with no commitments — not open relationships.

Interestingly, “Gen Xers are 129% more likely and Boomers are 224% more likely than Millennials to have dated more than one person at a time,” and perhaps even more fascinating is the fact that more women than men have two-timed, at 69 percent and 51 percent respectively.

If you want to impress a lady on the first date, you should keep your phone out of sight and in your pocket, because apparently, regularly checking your phone is the biggest first date offense you can commit, and will probably cause her to never speak to you again.

Furthermore, you should also cap off the evening after two drinks, because 80 percent of women think it’s not appropriate to have more than two drinks on the first date. You know, because it’s definitely not cute to get too fucked up.

Other first date turn-offs to avoid include being rude to the wait staff, with 38 percent saying this is a turn off, arriving more than 15 minutes late, and asking your date for a bite of her food or a sip of her drink.

9. You’ll have the best sex of your life at the age of…

So, good news for anyone who’s swiftly approaching their 60s!

Apparently, 1 in 4 singles would totally bang a sex robot, which isn’t all that surprising considering how popular sexbots are becoming these days.

However, nearly 50 percent of people said they’d consider it cheating if they caught their partner having sex with a robot, even though they’re inanimate objects. But still, I get where they’re coming from.