Everything you need to know about Apple’s October 2021 device drop. 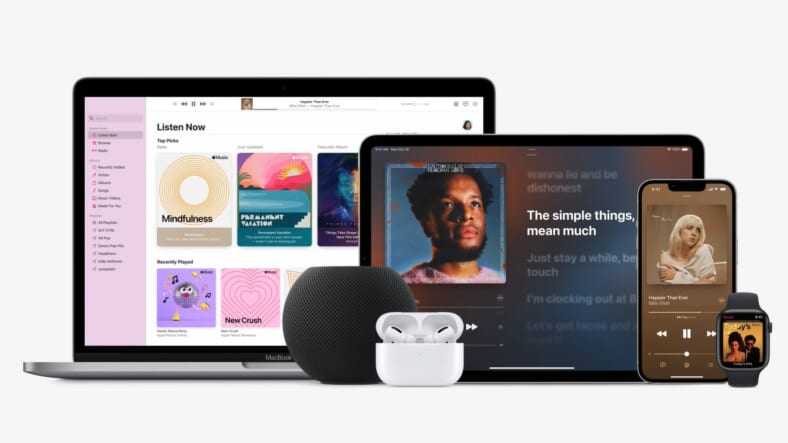 Apple is at it again. After last month’s announcement focused on iPads and iPhones – all of which are now out in the wild – Apple is back on stage to draw the curtain back on their upcoming slate of AirPod headphones and MacBook Pros.

Check out all the details about the newly announced AirPods 3, the powerful new, larger MacBook Pros and a colorful splash introduced in the HomePod Mini family.

Apple’s insanely popular AirPods have been updated and are bringing some of the best pro features to the entry-level buds. Now with spatial audio and Dolby Atmos capabilities, better button control and an internal redesign for even better audio quality. This new version of AirPods are now sweat and water resistant and designed to create better sound quality in the ear. They also feature Adaptive EQ to help calibrate sound quality based on an individual ear shape.

Battery upgrades now give the AirPods 3 up to six hours of use on a charge, with 30 hours available overall when accounting for the battery case. The AirPods are finally getting wireless and MagSafe charging too and can boost the earbuds to a full hour of use on just five minutes of charging. The AirPods 3 start at $179 and preorders are open now with the new wireless earpods making their way to eager customers next week.

Apple’s pro laptop line was always a powerhouse but now Apple is upping the ante by reimagining the entire computer, inside and out. Finally integrating Apple Silicon at its core, these new 14” and 16” MBPs will feature two of Apple’s home-baked chips, the M1 Pro and M1 Max. Those in-house chips integrate overall power with graphics processing and make these new MacBook Pros insanely powerful, quiet, efficient and thin.

Apple spouted a ton of performance metrics that remain to be seen in actual testing but it’s an impressive entry into the MBP history, one that makes some major departures from Apple’s previous MBP offerings and brings back important features that users have missed over the past few years. Primary among them is the return of MagSafe charging.

Apple has also done away with the TouchBar in favor of a full-sized keyboard and huge touchpad for all those multitouch gestures. These computers feature every port imaginable in this lineup with HDMI-integration finally returning and a full-sized SD cardslot right on the body. It seems Apple finally got the message that pro users, rightfully, hate adapters.

The two display’s, both an inch bigger than their pro predecessors, do even more with their form factor because Apple is now adding an iPhone style notch to the top of these MBPs, wrapping them with the menu bar that once disappeared and making for a thinner bezel in a laptop than ever before. Huge battery life power these two MBPs with the 14” getting 17 hours of video playback on a charge and the 16” getting a whopping 21 hours. Those are staggering numbers for a laptop.

Both available in Space Gray and Silver, the 16” MacBook Pro starts at $2499 and the 14” starts at $1999. Preorders are open now with these two new powerhouse laptops hitting customers next week.