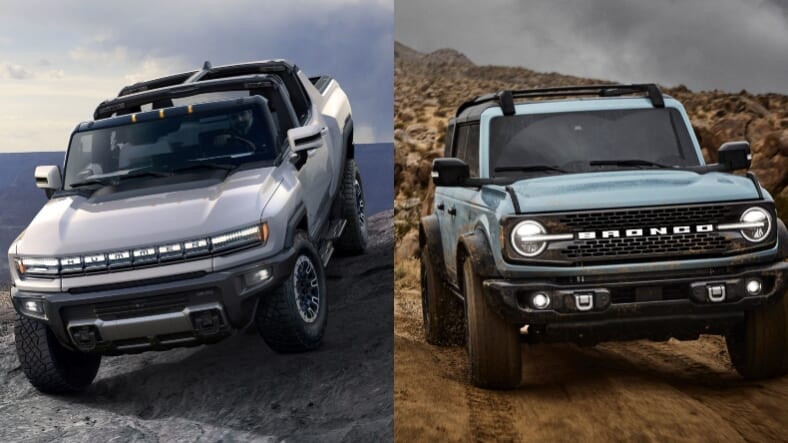 Inaugural examples of the auto industry’s hottest 4×4 prospects just made over $3.5 million for great causes.

The 2022 GMC Hummer EV and 2021 Ford Bronco, VINs 001, were auctioned off at Barrett-Jackson’s buzzy recent Scottsdale sale, with all proceeds benefitting charities.

Another incredible #charity moment! The first-ever 2022 @GMC #HummerEV Edition 1 VIN 001 just sold for $2.5 million, all of which will benefit the @Tunnel2Towers! pic.twitter.com/pyy7VhYqU7

The rebooted Hummer, featuring a a white exterior coat, a black “Lunar Horizon”-themed interior, and a cylinder count of zero, fetched $2.5 million for the Stephen Siller Tunnel to Towers Foundation. The nonprofit’s name honors a firefighter who died while saving others during the September 11 attacks.

Meanwhile, the revived Bronco—a fully-loaded First Edition with an exclusive Lightning Blue exterior and Dark Space Gray/Navy Pier interior—went for $1,057,000 at the hammer drop. All proceeds will go to the National Forest Foundation and Outward Bound.

Another incredible charity moment! The 2021 @Ford Bronco 2-door VIN 001 just sold for $1.075 million, with 100% of the hammer price to benefit the @NationalForests Foundation and @OutwardBoundUSA! pic.twitter.com/2spSkMaB1M

The two organizations are part of the automaker’s new Bronco Wild Fund mission, which encourages people to get outside and experience the outdoors, according to Car and Driver.

"The Cobra to End All Cobras" – The only remaining Shelby Cobra 427 Super Snake CSX 3015 hammered for an incredible $5 MILLION! Congratulations to the winning bidder on adding a new chapter to the legend of Carroll Shelby's personal Super Snake! pic.twitter.com/zFuXn9jCFM

But it was automotive icon Carroll Shelby’s personal 1966 Cobra 427 Super Snake that upstaged them all with a $5.5 million winning bid. Powered by a 427 cubic-inch (7.0-liter) V8 engine aspirated by duel Paxton superchargers, the “Cobra to End All Cobras” was specced by the man himself to dominate his friend’s Ferrari in the streets.